A glittering gradient outfit composed of a long sleeved shirt with a gradient cyan torso, and sleeves starting from light blue to  cyan. Both have white curled vine designs, along with blue gem snowflakes circling the top of each sleeve. Going down each side of the torso is a line of teal with darker teal snowflake designs, while hanging from the top of the chest is a pearl chain with a snowflake charm hanging from it. The top is lined with white fluffy material and ice-like material. At the center is an ice-colored cyalume heart charm with a light blue crystal beneath it. The skirt is in three layers, with the top light blue, the second light blue to sky-blue gradient, and the bottom an ice-color to white gradient. Each skirt layer is coated in glitter and white lining, with the top having a snowflake pattern attached to it, the second has white designs, and the bottom is covered in dark teal curling vines. The skirt layers are shaped like a giant snowflake, and blue gem snowflakes hang from the bottom. A huge ice gradient ribbon is attached to the back.

Boots of white to pale blue gradient with the curled vines following this pattern. Four pieces of fluffy material wrap around each leg, coming in pale blue, sky-blue, and white. The bottom is white, while the heel is a shard of ice. The cuff is light cyan fluff with a snowflake sewn to the corner, followed by two small blue gem snowflakes.

A winged ice tiara with four cyan gems attached to it. In the center is a white and blue snowflake. 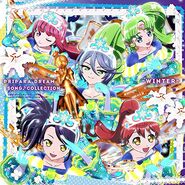 Retrieved from "https://pripara.fandom.com/wiki/Winter_Dream_Parade_Coord?oldid=205553"
Community content is available under CC-BY-SA unless otherwise noted.