Start a Wiki
WITH Escort Purple Coord (WITHエスコートパープル) is a Premium Coord with no brand. It was first seen worn by Koyoi Takase in Episode 141. It resembles the WITH Escort Red Coord, WITH Escort Blue Coord, and the Galactic Blue Coord.

A one-piece outfit composed of a white jacket that has purple coloring going down the middle and side of the sleeves. On the chest is a dark plum W with gold lining and a row of buttons going down each side. On the left of the chest is a dark blue and gold winged emblem with two chains attached from it to two buttons on the opposite side, while a gold fringed shoulder-pad rests on the shoulders. On the upper left arm are two bands, one of gold, one crimson with gold lining to match the short included cape. Around the navel is a purple band that has a clock ornament on the side with chains, a ruby gem, and a single gold wing attached to it. A ruby hangs from the collar and the user gains plain white pants, and a pair of dark plum finger-less gloves.

White boots with a dark plum-colored sole and two purple and gold buttoned straps on the foot. On the side of the foot is a gold winged ornament. The cuff is purple with a single band of gold around the bottom.

WITH Escort Purple Coord is a Premium Cyalume Rare Coord from the brand Brandless. It first appeared in the 2017 Series Promotional Coords. 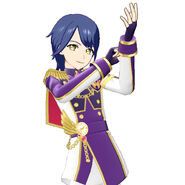 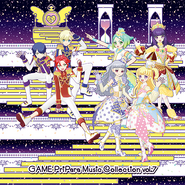 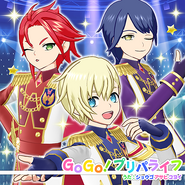 Add a photo to this gallery
Retrieved from "https://pripara.fandom.com/wiki/WITH_Escort_Purple_Coord?oldid=208541"
Community content is available under CC-BY-SA unless otherwise noted.