Sunny Zoo Cyalume Coord (サーニーズーサイリウム) is a coord from the brand Sunny Zoo. It was first seen used by Pepper Taiyou in Episode 120.

A brown top with orange ribbon and a trim of white fluff lining the bottom to match the sleeves hanging beneath the shoulders and making up the included choker. Hanging from the choker are yellow pom-poms. A fuzzy yellow bow with brown tiger stripes is sewn to the chest with three white pom-poms, one in the middle, and one hanging from each tail. The two layer gradient skirt is a yellow tutu pleat with stripes of orange and brown, resting over a white pleat petticoat and a fluffy pale yellow and white balloon skirt. Sewn to the back is a tiger tail. Comes with yellow fuzzy mittens with brown stripes on top. The paw pad is orange to match the fuzzy bow sewn to the wrist with a large pom-pom resting in the middle.

Yellow fluffy boots with a brown sole and stripes on top of the foot. The fluffy white cuff on top matches the cuff of the included orange stockings. Yellow ribbon wraps around the leg with a bow tied in the front, accent with three white pom-poms.

Sunny Zoo Cyalume Coord is a Natural-type Cyalume Rare Coord from the brand Sunny Zoo. It first appeared in the Divine 2016 Vol.4 Collection. 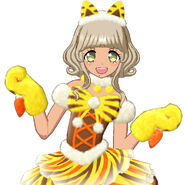 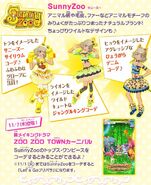 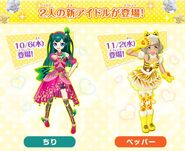 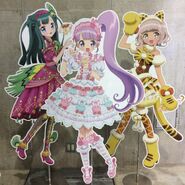 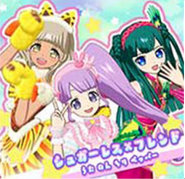 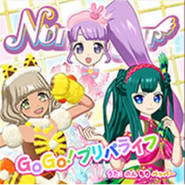 Retrieved from "https://pripara.fandom.com/wiki/Sunny_Zoo_Cyalume_Coord?oldid=206942"
Community content is available under CC-BY-SA unless otherwise noted.