A colorful red, orange, and yellow dress. The torso is composed of yellow material covered by white and glittering orange material on top of it. Pinned to the right of the chest is a sunflower with a small cyalume charm and bow in the center, with bright green leaf attached to it. A folded, white and orange cloth hangs from the bottom, as does a chain of sky blue and gold beads. Around the top is glittering red material lined by the same beads and white coloring. A single sleeve hangs off of the left shoulder, composed of six layers of glittering red and white material covers the left arm. A single sunflower is attached to it, to match the two-layer glove for the right hand. The skirt is a two-layer, composed of a short white split lined in glittering orange with many sunflowers on it. Along with orange glittering ribbon and bead chains, some of which hold silver charms. The second layer is a split of glittering red and glittering yellow. Attached to the back is a very large, pale yellow ribbon tied into a bow.

Pale yellow pumps with glitter applied to it, along with the orange bottom and heel. At the foot insert is a large sky blue pearl with two small white pearls surrounding it. Around each ankle is a red ruffled piece of material with a feathery lining and glitter applied. Around the top is a chain of sky blue, gold, and white pearls with a silver star hanging from the center, while a single sunflower rests on the outer-side. Further up on the leg are the same pearl chains and silver star charms.

A gold tiara composed of a very thin band. The design is curled inward along the bottom with a single ruby on each side. The design shapes like a small wing on each side with a small curled part holding a diamond gem. In the center is a sunflower.

Summer Dream Parade Coord is a Premium Cyalume Rare Coord and it has no brand. It first appeared in the Dream Theater 2015 3rd Live. 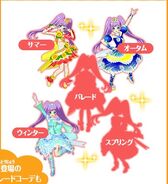 Retrieved from "https://pripara.fandom.com/wiki/Summer_Dream_Parade_Coord?oldid=202834"
Community content is available under CC-BY-SA unless otherwise noted.