A white tank-top with ruffles on the chest and a brown vest with darker brown detail worn over it. A silver zipper goes down the middle, surrounded by four purple and silver buttons. The shoulder straps have silver details and a buckle. Hanging around the neck is a pair of goggles, a gold key with heart handle, and an ornament composed of a clock, fleur de lis, and a gear. Black, puffy lowly worn sleeves are included with thin silver lines and a brown belted strap on the top. Comes with purple finger-less gloves with gold lining and detail on top of the hand. White ruffled material sticks out from the end, and two brown belt straps circle the wrist.

A short purple pleat skirt with a brown diagonal belt and silver buckle, worn beneath a larger brown layer trim with dull, pale lilac ruffles. The top skirt has dark brown piped detail and a silver zipper on each side, connected to a large gold circle that has a small heart in it. Two chains of small heart-handle keys reside on the right hip, while the left has the gear, lock, and fleur de lis symbols. The black belt has silver detail.

Black boots with brown stitching on the toe and the top, matching the several straps wrapped around the lower leg. Gold gears are sewn to either side of the ankle. The bottoms are dark purple to match the included socks, which have a mesh section of black on the front. One sock has two brown belted straps on top.

A crown made from brown straps over a darker brown bottom. Silver studs adorn each strap, and sticking out from the top are two white feathers.

Steam Punk Leather Coord is a Cool Super Rare Coord from the brand LOVE DEVI. It first appeared in the 2017 Series Promotional Coords. 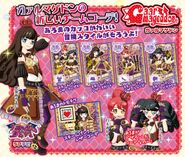 Retrieved from "https://pripara.fandom.com/wiki/Steam_Punk_Leather_Coord?oldid=201627"
Community content is available under CC-BY-SA unless otherwise noted.