A white top with pointed bottom and a piece of ruffled fabric sewn to the middle. A pale brown vest is worn over this with darker brown detail, raspberry buttons, and a zipper going down the center. On the shoulder is a strap to match those on the puffed, cream and pale brown sleeves. The collar is raspberry colored with a pair of goggles worn around the neck, along with a gold chain that has a heart-shaped key. Sewn to the right of the chest is an ornate ornament. Raspberry and gold finger-less gloves are included with a ruffled white fabric sticking out of the cuff and two, pale brown straps on the wrist.

A short raspberry pleat skirt with a pale brown belt, worn beneath a pale brown cape-like skirt layer that has dark brown details, several gold ornaments sewn to it, and a zipper on each side. The belt is white with dark brown loops.

Tall white boots with pale brown stitching on the toe and a raspberry bottom. Gold gears are sewn to the back corner on each side, while pale brown straps wrap around the leg. Comes with raspberry stockings that have mesh in the middle. On the left leg are two pale brown straps.

Brown material formed into the shape of a crown, with each strip adorned with silver gems. A dark brown piece rests on the bottom, while two beige feathers stick out of the top.

Steam Punk Camel Coord is a Lovely PriPara Rare Coord from the brand Marionette Mu. It first appeared in the Time 2017 Vol.4 Collection. 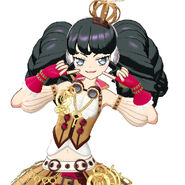 Add a photo to this gallery
Retrieved from "https://pripara.fandom.com/wiki/Steam_Punk_Camel_Coord?oldid=206959"
Community content is available under CC-BY-SA unless otherwise noted.