Starlight Unicorn Coord (スターライトユニコ) has not yet been worn by anyone, nor has it appeared in the anime. This coord is from the brand Dreaming Girl, and is a Premium Type coord. Sweet Unicorn Coord and Twinkle Unicorn Coord resemble it.

A pale pink tank-top with three ruffled layers on top of the chest that come in cyan, lavender, and pale yellow. On the bottom of the skirt are two layers of frilly trim, one is cyan and the other is peach. On the front of the chest is a pearled-pink horse with shut eyes and a cyan horn. She has a long flowing mane of pale purple, chiffon, and frosted-pink with stars strewn through it. Small pale pink and white angel wings are sewn onto the back of the chest. The three-layer ruffled sleeves attached to the shirt are cyan, lavender, and pale yellow. Comes with pearl chains wrapping around the arm; one is pink and white, while the other is cyan and chiffon. They attach to each lilac sleeve attached to the wrist. On the top and bottom are two trims of ruffles; the top has pink and cyan, while the bottom has chiffon and lavender. Matching stars are sewn onto each sleeve, along with a frosted-pink bow. Around the neck is a two-layer pearl chain to match the pearls on each arm. On the left side is a single, chibifed pale pink-white wing with three ruffled layers attached to it that come in pale yellow, lavender, and cyan.

A fluffy, puffy pair of lilac pumpkin pants.Connected to it are four, slightly pleat layers of skirting in a diagonal pattern. The band is chiffon, while the top skirt layer is pale pink with glitter applied and two pearl chains, one being white and pink, while the other is cyan and pale yellow. Attached to the chains is a white circle with hot pink writing. A piece of frosted-pink frill material circles the badge with two pearl chains hanging from the bottom. The second layer of skirt is cyan, while the third is lavender and the fourth is chiffon. Behind the skirt, the layers are are in an alternate layer and hang like a cape with flower-shaped holes cut out. Each cuff is a fuchsia strip with two frills attached to it, one pale yellow, the second lavender. Pinned to the right of the band is a pink and indigo star with an indigo, lavender, and cyan trail behind it.

Fluffy ivory boots with a white and pink unicorn head making up the heel. So far up the boot is a frilly, sparkling seafoam bow with a pale lilac star in the middle. Comes with glittering lilac stockings with thick fluffy cuff. Two frills circle each leg, the right has cyan and pink, while the left has lavender and chiffon. Stars of seafoam, blue, purple, pink, and gold are randomly printed on each stocking. 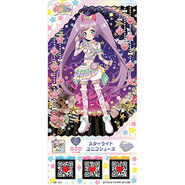 Add a photo to this gallery
Retrieved from "https://pripara.fandom.com/wiki/Starlight_Unicorn_Coord?oldid=202507"
Community content is available under CC-BY-SA unless otherwise noted.