A black tank-top is worn beneath a white T-shirt with two blue stripes on the torso, beneath the word Nice written in blue cursive with a red, blue, and white stylized star. Gold dots line the collar. One sleeve is blue with a white star pattern, while the other is red and white striped. Comes with white finger-less gloves with blue ruffled lining and stripes of blue and red.

Split design Capri with a silver belt buckle at the center of the waist and two black straps with a white star pattern. One leg cuff is black with the same pattern, while the other is black and white striped. The left side is red and white striped with a blue, white, and single red line for a belt, while the left is blue with white and yellow stars and dots, a rocket, and a colorful pastel planet depicted above the knee. The belt for the right is blue and white.

Blue shoes with solid bottom and a print of red and white stars. String at the center of each shoe is black.

A blue cap with large white stars designed on it. The top of the hat is red to match the heart-shaped glasses attached to it.

Star Border Coord is a Pop type Rare Coord from the brand Fortune Party. It first appeared in the Divine 2016 Vol.1 Collection. 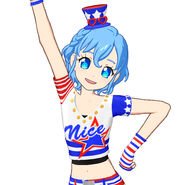 Retrieved from "https://pripara.fandom.com/wiki/Star_Border_Coord?oldid=201966"
Community content is available under CC-BY-SA unless otherwise noted.