A red dress with five white lines going down the center adorned with three tiny bows. Brown piping lines the torso with with a thick lace ribbon sewn to the back and smaller bow sewn to the middle of the chest, adorned with a white and yellow ornament and three pieces of white cloth, each different from the other. White and emerald striped straps rest on each shoulder, while a ruffled, stained glass designed sleeve rests beneath it with brown piping and lining, along with tiny white bows. The skirt is in two layers, each red with shiny stained glass bells attached to a lime bow alternating with a pink star. On the left hip and lower right is stained glass material lined by brown piping, while the skirt is naturally accent by a white piece of material adorned by gold studs and a single white piped line in the middle. White ruffles circle the waist to match the included wrist accessories adorned by a brown bow. A brown choker is included with a small emerald stone and tiny gold dangles.

Red boots with a gold sole and wedged heel. Three lines go down the center, two white, one brown. The cuff on top of the boot is gold with a thin white ring in the middle and ruffled material hanging beneath it. A brown bow rests in the middle with a white and yellow ornament and pieces of pleat, stained glass designed material, each piped in brown and adorned with white bows.

A red top hat with a thick brown piped section in the middle, adorning the stained glass diamond design in the center.

Sparkling Christmas Berry Coord is a Cool-type Super Rare Coord from the brand Holic Trick. It first appeared in the Divine 2016 Vol.5 Collection. 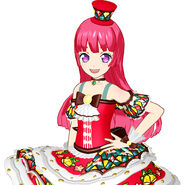 Retrieved from "https://pripara.fandom.com/wiki/Sparkling_Christmas_Berry_Coord?oldid=145731"
Community content is available under CC-BY-SA unless otherwise noted.