A teal top with black and yellow leopard print all over it and ruffles of blue. A jacket of acid-green lined in fuchsia is worn on top of it, with markings, shapes, and splashes of color in various shiny blue, light fuchsia, dark green, and lime green. At the right of the chest is a white decorated fox mask on top of a ruffled material; a pale fuchsia on top of a second teal with leopard print under it. Two rope ribbons are attached to it, one being sapphire, the second violet. Around the middle is a glittery light fuchsia band with a thick black and sapphire belt with silver accenting and a gold section at the bottom with silver chains attached. On the back is a thin, large black, indigo, and fuchsia glittering bow. Comes with a black lace collar with silver around the middle and chains, along with black, teal, and fuchsia arm sleeves with a white piece attached at the wrist.

A two sectioned skirt that starts with a bright yellow band. One side is a glimmering fuchsia lined with teal and fuchsia checkerboard print. The other side is a three pleat; the top yellow with turquoise and raspberry lace, pink and black with yellow lace, and blue and turquoise with dark blue lace. At the middle was a yellow, indigo, and green section of material that hangs down separately, lined in royal blue. In the middle of a fuchsia corset-string design. Attached to the skirt is a pale lilac tail.

A big white decorative fox mask with two ropes tied behind it, one fuchsia, the other sapphire. The rope and fox are attached to two ruffled pieces of material; the top pale fuchsia, the second turquoise with yellow and black leopard print.

Platform sandals of yellow with purple underneath and lines of green. Across the toe is a single yellow band with pink and black leopard print. Comes with two separate colored stockings, both with long yellow rope-string tied into a bow, and fuchsia fishnet. The right stocking is royal blue with fuchsia cuff, while the left is teal with purple cuff.

Sparkling ☆ Vivid Coord is a Cool Super Rare Coord from the brand Baby Monster. It first appeared in the 2014-2015 3rd Live Collection. 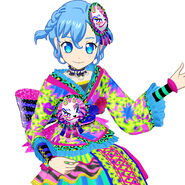 Add a photo to this gallery
Retrieved from "https://pripara.fandom.com/wiki/Sparkling_%E2%98%86_Vivid_Coord?oldid=202464"
Community content is available under CC-BY-SA unless otherwise noted.