Sophie Hojo (北条そふぃ, Hōjō Sofi) (officially Sophy Hojo) is the tritagonist of the series. She is a 9th grader at Paprika Private Academy and a cool-type idol. Her preferred brand is Holic Trick and she has a Fan Club. Because Sophie has a weak body, she often goes into Fancy Mode.

Sophie has sharp, purple eyes and long magenta pink hair that curls down until her waist. She is very tall and is often described as "cool" by her fans. Sophie's appearance in public is actually just a side of her that happens when she eats a Red Flash (a red cherry/umeboshi).

Her real appearance - known as her Fancy Mode - consists of layered, messy hair that covers her eyes while wearing a grey sweat suit. Since forming a unit with Laala and Mirei, she walks around PriPara in her Fancy Mode; only eating Red Flash before a performance. Additionally Sophie is in Fancy Mode whenever she attends school.

Eventually, her fancy mode hair style becomes her PriPara style to reflect on her ability to take care of her appearance, with a cowlick on her head.

Sophie is very popular at her school, and admired by many of the students. When she eats a Red Flash (pickled plum/cherry), her personality - likewise with her appearance - changes. Her public personality is cool and on top of things, while her other personality (Fancy Mode') is extremely disoriented and directionless. It is also hinted that she has low blood pressure. While she is in her Fancy Mode, she says "Pushu~" a lot. In Fancy Mode, she is quite naive and oblivious to what is around her, but since when she began forming her friendship with Laala and Mirei, she has been working to improve herself.

Despite the fact that she's very absent-minded as her true self, Sophie happens to be very perceptive and can pick up on tiny details others would normally miss such as Unicorn's twitching tail that hinted her lie, or Mirei's catch-pose being slightly off which hinted something troubling her.

Hōjō (北条, Hōjō): Hōjō can be split up into two. The hō means north, while the jō means lines. It can be roughly translated into northern line. This can be considered a pun as Laala and Mirei's last names translates to center and south respectively, while she is north.

Sophie (そふぃ, Sophie): The name Sophie is a normal western name. It originates from the Greek name Sofia, which means wisdom. 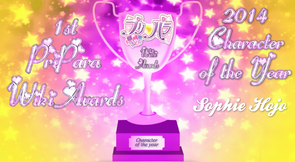 Retrieved from "https://pripara.fandom.com/wiki/Sophie_Hojo?oldid=211628"
Community content is available under CC-BY-SA unless otherwise noted.