Sadako Gozen (御前定子, Gozen Sadako) is the leader of Sophie's fan club. She devotes her time to protect Sophie.

Sadako has long, layered beige hair with bangs, and sharp iron-blue eyes. She wears a pink headband with an "S" on it over her bangs. She is typically seen in the Sophie's Fan Club jacket with her school uniform.

Sadako (節子) - Means "Proper Child" and/or "Child of Integrity". Her name could relate to the fact she is responsible, protective, and the leader of Sophie's Fan Club (who are also Sophie's "guards"). 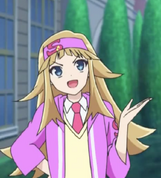 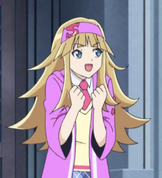 Add a photo to this gallery
Retrieved from "https://pripara.fandom.com/wiki/Sadako_Gozen?oldid=192518"
Community content is available under CC-BY-SA unless otherwise noted.