A midnight blue top with textured torso and puffed sleeves. On each shoulder is a glittering piece of blue fabric with gold beads, while the cuff has gold pieces and tiny gem accents. On the chest are two strips of white fabric and glittering blue frills, and sewn to the middle is a blue gem on a gold base. A gold gem hangs under this. Around the navel is white fabric with gold detail and a gem in the center. Midnight blue gloves with a white cuff trim by gold beads to match the strip inches from it. On the neck is a white choker.

A tutu lined in gold, made from alternating strips of glittering blue and textured midnight blue. Between each strip is a gold accent with a blue gem in the middle. Sticking out from the bottom is a black layer covered in a glittering blue print. Over this is a midnight blue pleat lined by a thick band of white and accent by gold designs. Each has a tiny gem on it, alternating with a tiny blue gem. Over this is a black lace layer, followed by a sequined pleat tutu. Gold beads are sewn around the waist.

Black pumps with sequined indigo designs on the toe, foot, heel, and sole. Lace trims the fabric surrounding the upper foot, along with a gold bead chain and a strap of white fluff. Black and sheer lace socks are included, adorned by four fluffy straps and gold bead chains.

A midnight blue textured hat with fluffy white fabric around the middle, adorned by an indigo gem on a gold base. Sequined indigo fabric adorns the side, while a gold diamond hangs from the gem. A gold chain resides beneath the fluffy fabric, along with a scalloped section.

Royal Fur Salvia Coord is a Premium Rare Coord from the brand Clock Garden. It first appeared in the Time 2017 Vol.6 Collection. 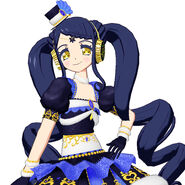 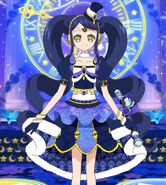 Add a photo to this gallery
Retrieved from "https://pripara.fandom.com/wiki/Royal_Fur_Salvia_Coord?oldid=201907"
Community content is available under CC-BY-SA unless otherwise noted.