A colorful outfit composed of a frilly blue top with pale blue lines is worn under a red vest with white lines and four white buttons. Attached to the left shoulder hole is a red two-layer pleated sleeve with two gold lines, along with a puffed sleeve with diamonds of black, blue, and red lined in gold. The cuff is solid black. On the right of the chest is a gold flower with feathers attached to it, along with two light gold chains that are held to the top left button. At the collar is a red tie striped with black and white. A pale gray pleated layer sticks out from the bottom of the shirt. The skirt is red with stripes of dull gold and blue, with a second solid red layer beneath it. A black part of material sticks out from the top of the skirt with four white buttons. A big blue bow rests on th back, while the dress includes a big loose blue cuff lined with black ruffles and a single yellow flower, while the right arm has a red glove with a row of yellow flowers and gold chains. Two layered ruffles stick out from the top; coming in colors of red, white, blue, and black.

Red pumps with black heel and bottom. On the heel of the foot is a bow, one blue, the other yellow. Comes with fishnet stockings, one of which has a red and white garter with yellow flower.

Royal Bunny Magician Coord is a Cool Rare Coord from the brand Holic Trick. It first appeared in the 2014-2015 3rd Live Collection. 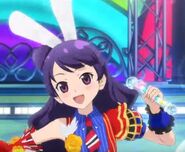 Add a photo to this gallery
Retrieved from "https://pripara.fandom.com/wiki/Royal_Bunny_Magician_Coord?oldid=205836"
Community content is available under CC-BY-SA unless otherwise noted.