Rei has long straight black hair, tied in a low ponytail and sharp gray eyes. The hair framing his face is cut straight and his bangs part in the front. Like Hibiki, he has noticeable eyelashes.

Like a regular butler, Rei is commonly seen wearing a suit and white gloves. He wears a light blue-violet vest under his coat and a white pocket handkerchief in the coat pocket.

Rei is a quiet and aloof man who appears to very loyal to Hibiki. As a butler he waits on Hibiki and is very obedient. He also appears to not be easily swayed as showed when Dorothy's "Max Beam" had no effect on him.

Hibiki Shikyoin - Rei's master. Rei appears to be very loyal to Hibiki, never questioning her actions or motives and instead goes along with them.

Ando (安藤, Andō): An (安, An) means peace or peacefulness and Dou (藤, fuji) means wisteria. This may refer to Hibiki as wisteria is a type of purple and Hibiki's surname contains the character for purple. Rei (玲, Rei): It could mean bell, bow, or order, all of which are related to Hibiki's role in Season 2, but the given kanji means the noise a bell makes. It could also be a pun on numbers, as it was used as the password to the burger joint right outside Pripara. An (Un) meaning one in French, Dou (Deux) meaning two in French, Rei (れい) is a way to say zero in Japanese. 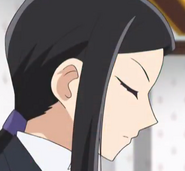 Add a photo to this gallery
Retrieved from "https://pripara.fandom.com/wiki/Rei_Ando?oldid=209078"
Community content is available under CC-BY-SA unless otherwise noted.