Start a Wiki
Rainbow Frog Coord (カエルちゃんレインボー) was first worn by Laala Manaka in Episode 9. This coord is very similar to the Purple Frog Coord, Sunflower Frog Coord, Frog Burst Coord and the Natural Frog Coord, the only difference being the color. This coord is from the brand Candy Alamode.

"The intensely pop-styled Rainbow Frog coord. The mere sight of this one is enough to make you smile."

"The brand for Mirei's anniversary is her favorite, Candy Alamode!"

A neon, mint top with a white line at the center of it. Worn on top is a short jacket with rainbow themed lines on the bottom and pink lining going up the center. The neck is neon yellow while on each sleeve there are multiple pom-poms with lime green spots.Pinned to the right side of the chest is a rainbow umbrella, while on the left there is a blue winking frogs head with a crown. Comes with long blue gloves with many white spots.

Fuchsia shoes with red string-bows and white and blue stripes lining the bottom. Comes with sky blue stockings that have clouds, a sun, and rainbow. The cuff is slightly darker with multiple pom-poms of fuchsia and white.

A big blue winking frog head with a crown on it.

Rainbow Frog Coord is a Super Rare Pop type coord from the brand Candy Alamode. It first appeared in the 2014 1st Live Collection. 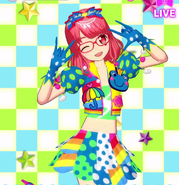 Add a photo to this gallery
Retrieved from "https://pripara.fandom.com/wiki/Rainbow_Frog_Coord?oldid=164830"
Community content is available under CC-BY-SA unless otherwise noted.