RONI Gingham Coord (RONIギンガム) was briefly seen worn by Yui Yumekawa in Episode 141. This coord is from the brand RONI. It is a Premium type coord.

A dress composed of a pink, pale pink, and white picnic-blanket pattern. The shirt is fairly simple, with pieces of material covering the shoulder and a some hanging beneath the arm holes. On the chest are two white buttons. The skirt has the white and pink ribbons on each side of the bottom. At the waist is a short skirt layer reminiscent of a folded tutu-skirt. Two thin layers of white to yellow ruffled skirting sticks out from the bottom. Comes with a gold chained necklace with a RONI design hanging from it, and lace bracelets composed of a bow attached to pink, pale pink, and white material.

Pale pink shoes with a thick white platform. Circled pearl chains are printed on the material and it has accenting of white and tea-rose. Comes with pale pink socks with RONI wrote on it in pink.

Comes with a pink pink, pale pink, and white bow with a pink square-shaped center. RONI is wrote in white.

RONI Gingham Coord is a Rare Coord from the brand RONI. It first appeared in the 2015 1st Live Collection. 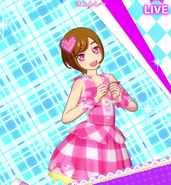 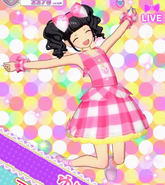 Retrieved from "https://pripara.fandom.com/wiki/RONI_Gingham_Coord?oldid=162892"
Community content is available under CC-BY-SA unless otherwise noted.