Start a Wiki
Quilting Warm Coord (キルティングウォーム) is a Pop-type Coord from the brand Fortune Party. It has not appeared in the anime yet. It resembles the Quilting Vivid Coord.

A white lined top lined with midnight blue ruffles, worn beneath a puffy diamond tile vest of raspberry, yellow, and orange, lined with midnight blue frills. On the torso is a midnight blue flap with two, gold diamond gems sewn to it. The lower half of the lapel is curved with three ornaments on the left side, including a large emblem pin, a small red and yellow bow with a gold and pink heart, and a gold and blue star attached to it by a gold bead chain. The upper portion of fabric is midnight blue and wraps behind the neck and sides. Puffed beneath the shoulder sleeves are included with a midnight blue strap accent by a line of white, the bottom of which is partially ruffled. Matching wrist accessories are included, lined with frills, along with a midnight blue ribbon tied around the neck that has a silver and gold heart in the middle.

A thickly pleated skirt made from the vests fabric and the back layered in a cape-like shape. The inside is midnight blue and the bottom is entirely lined with bunched ruffles. The waistband is black and three pins adorn the right hip, matching those from the top.

Midnight blue pumps with a cubed heel and a fluffy pom-pom sewn on of the foot. White stockings are included with a scalloped midnight blue cuff. Beneath it are magenta and orange split bows, each adorned by a tiny pom-pom.

A puffy diamond tile bow that has a ruffled, solid white layer beneath it. Sewn to the center is a large fluffy pom-pom.

Quilting Warm Coord is a Pop-type Super Rare Coord from the brand Fortune Party. It first appeared in the Dream Theater 2017 Time Vol. 5. 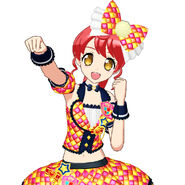 Retrieved from "https://pripara.fandom.com/wiki/Quilting_Warm_Coord?oldid=197288"
Community content is available under CC-BY-SA unless otherwise noted.