A white top with glittering lilac going down the center, lined with glittering purple to match the large rings on the sleeve, collar, and glove. Sewn to the bottom of the torso is a section of lilac and white glittering gradient fabric, resting over a blue, white, and purple galaxy fabric. Silver lines, glittering sections, and studs adorn the chest, accenting the thick band beneath it. Sewn to the shoulder sleeve is the galaxy fabric to match that sticking out of the glove, and the shooting star accessory on the collar. A Pasa badge is pinned to the left of the chest. Included are raspberry studded arm accessories and a pair of white gloves with two rings on the bottom coated in glitter, one purple, one silver. A single silver bracelet rests on the left wrist.

A three-layer tutu skirt in silver with glitter coating and lining of glittering purple. The top two layers have a fold reminiscent of curls and flowers, while the bottom is pleat. The galaxy waistband has sparkles on it and two pieces of glittering ribbon hanging on the right, coming in purple and white with silver detail and a section of raspberry adorned with two silver studs.

White boots with silver bottom and detail. Lilac to white glittering material rests in the middle with a band of glittering purple rests above it, along with two pieces of fabric, one silver, one galaxy. Comes with purple and silver glittering stockings with an raspberry studded band for each leg, one of which has a futuristic gun on the side.

A large glittering purple gradient bow attached to a bigger silver ruffled bow. Attached to the bow are several silver studs and a Pasa badge. Three wires stick up, each with a star attached to it, two of which are cyan, one pale indigo. 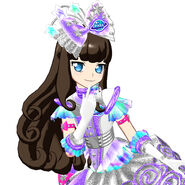 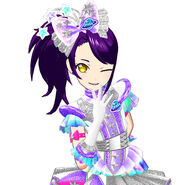 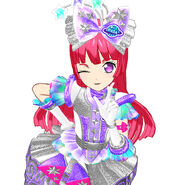 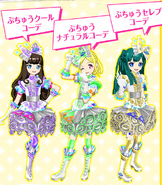 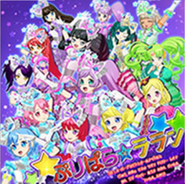 Add a photo to this gallery
Retrieved from "https://pripara.fandom.com/wiki/Puchu_Cool_Coord?oldid=190757"
Community content is available under CC-BY-SA unless otherwise noted.