Prism Stone is a cafe/boutique/gateway to PriPara. It is run by Meganee Akai and Meganii Akai. You can shop for clothing and accessories, get something to munch on in the cafe, or you can step into the world of PriPara by using the gateway at the back of the store. They also have a brand named after them, linked here.

Prism Stone is a pale beige building that appears to be very long and big. The roof is dark purple and white, with many long trails of red and gold ribbons, and a magenta ribbon. The logo is on top of a pale pink with dark pink dot print, while to each side of it is a pale pink flag with Cafe wrote on it, and a small light. The ground has a small amount of yellowing bricks and material lining it with many plants, except for the center which leads to the shop front. The ground before the shop is pale pink and white checkered print, with a few tables and chairs located under big red parasols for people to sit under. The sliding door sits in the middle of this, while the many other windows have pink curtains and fashions that can be seen.

The shop is mainly composed of pinks, purples, and golden-yellow with accents of blue and white. The ceiling has many various colors, which each kept separate with a gold-bronze line. The Prism Stone logo is randomly placed all over the shop, while a big counter is usually where anyone entering starts out at.

The floor comes in a checkered pattern of gold, magenta, and purple, with small steps separating a few of the sections. The floor inside each of the small sections seems to be pale pink and white, while a thick, white beam separates each of them with a golden music trail design.

From what is usually seen, there is the blue and white themed Make Salon, with pink and gold heart-themed chairs and many nail polishes that line the counters. Accessories and outfits are kept in a portion of the shop opposite to the salon.

There is also a cafe for girls to sit inside of the shop instead of outside if they choose.

A giant poster in a mall 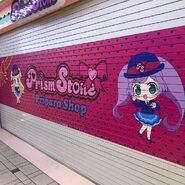 The back-ish of the store shown in the OP.

The actual back of the store showing the gateway into PriPara and the boutique.

The gateway to PriPara inside the store.