Paprika Private Academy has many rules that are enforced by Headmistress Gloria and the Disciplinary Committee. For the list of known rules, please head to this page.

The girls' uniforms for elementary school are a yellow, pink, and white one piece dress. The dress is mainly yellow, but the sailor dress flap on the back is white with a pink stripe. The sleeves are white with pink border stripes. There is also a pink and white ribbon on the front with the school's logo. The girls wear socks and brown loafers.

During the winter, the students wear light pink cardigans with dark pink cuffs and stripes on the sleeve and bottom of the sweater.

The male elementary school uniforms are a yellow sailor shirt, which also has a little bit of blue and white. The sailor flap on the back of the shirt is white with a blue stripe. They also wear checkered shorts, socks, and brown loafers.

The females' uniforms for middle school is a yellow v-neck sweater with pink stripes on the sleeves with a white dress shirt under. They also have pink ties. They wear a blue checkered skirt, along with white socks and brown loafers.

The male middle school uniforms are a a yellow dress shirt with a checkered blue tie. They wear black slacks and we can assume that they wear brown loafers. 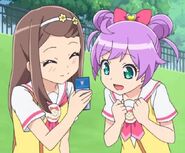 Add a photo to this gallery
Retrieved from "https://pripara.fandom.com/wiki/Paprika_Private_Academy?oldid=211049"
Community content is available under CC-BY-SA unless otherwise noted.