My☆Dream Milky Orange Coord (マイ☆ドリームミルキーオレンジ) is a Pop-type coord from the brand Neon Drop. It is first seen in episode 176 worn by Nino Nijiiro. It resembles the My☆Dream Milky Green Coord.

A white sleeveless top with two chains on the torso connected by gold stars. Pale orange sleeve cuffs are included with an orange and pale indigo check pattern, along with two gold bands and three ruffled pieces of fabric coming in pale blue, white, and cream. The scalloped fabric around the top matches, with only the pale blue fabric trimming it. A cream fabric sticks out of the bottom with a pale blue band beneath it, bordered in cream with bows on the side, one with a ribbon tails. A white pleat fabric is sewn to the bottom of this with two gold braided chains on the hem. A cream top with similar chains attached to circular buttons is included with a solid white color. Draped around the chest and left shoulder is a cyan sash adorned with a rainbow of bows and a large gold star that has an N etched on it and a pair of tails coming in pale pink, cyan, lavender, and accent by gold chains.

A cream check miniskirt with several ruffled layers sticking out of the bottom, two white, one cream, and one pale blue. Sewn to these are white puffed shorts with a cream cuff that has a gold border and trim of pale blue ruffles. A cyan sash hangs from the waist adorned with the bows and star from the top, while sewn to the right hip is a two-layered cream check pleat fabric lined with ruffles. On the back is a large white two-layered bow lined with pale blue ruffles.

Tall white boots with gold scalloped piping around the foot and three gold straps, one on the ankle, two on the leg. On the ankle strap is the star ornament, while on the front of the boot is a cyan band adorned with small rainbow bows. The cuff is lined with pale blue ruffles.

A pleated white piece with two pieces of cream check ruffled fabric, each with a gold line on it. The gold star ornament is sewn to the front corner and has an N on it.

My☆Dream Milky Orange Coord is a Pop-type PriPara Rare Coord from the brand Neon Drop. It first appeared in the Time 2017 Vol. 5 Collection. 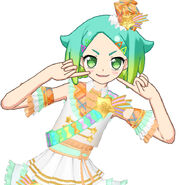 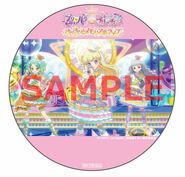 Retrieved from "https://pripara.fandom.com/wiki/My%E2%98%86Dream_Milky_Orange_Coord?oldid=205975"
Community content is available under CC-BY-SA unless otherwise noted.