Mrs. Minami (みれぃの母, Mirei no Haha) is the mother of Mirei and a defense attorney.

She has long, wavy, dark purple hair in a high ponytail with a pink scrunchy, and tannish-brown eyes. In her debut, she wears a yellow turtleneck, a white knee-length skirt, white slippers, and a red pendant necklace.

Mrs. Minami is a friendly, kind person. She and her husband often bicker about whether Mirei will become an idol attorney or a idol prosecutor, leading to make-shift trials that Mirei often judges.

Mrs. Minami seems to have a good relationship with Mirei. She encourages her as an idol but also wishes for her to pursue being a Defense Attorney idol.

Mr. and Mrs. Minami seem to get along very well. However when a potential argument comes up, even a minor one such as over cookies or pudding for dessert, both of them go into Lawyer mode. They battle in make-shift trials that are judged by Mirei. But even after the trials their relationship seems as strong as ever. 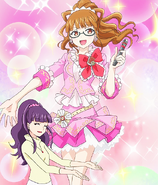 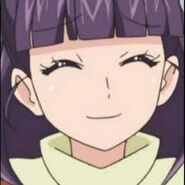 Add a photo to this gallery
Retrieved from "https://pripara.fandom.com/wiki/Mrs._Minami?oldid=206497"
Community content is available under CC-BY-SA unless otherwise noted.