Mirei School Uniform Coord (?) has appeared since Episode 01 - I Became an Idol!. This coord is Brandless and it is a Premium Type coord. This coord is worn by Mirei Minami, Sophie Hojo, Shion Todo, Dorothy West, Fuwari Midorikaze, Sophie's Fan Club and all the female middle school students of Paprika Academy.

A pale yellow vest with a single cherry line around the hem, resting on top of a white shirt and a thin red tie. A blue jacket rests over this, lined in gold to match the straps, lapel, and buttons. The pleat skirt is composed of denim, pale blue, and indigo, along with white lines.

Brown loafers with black sole. Comes with tall black socks with a single white stripe along each top, below the cuff.

Mirei School Uniform Coord is a Rare Premium Coord and it has no brand. This first appeared in the 2014-2015 3rd Live Collection. 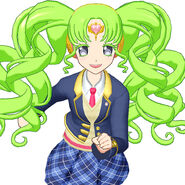 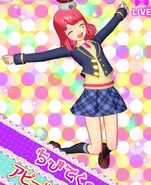 Add a photo to this gallery
Retrieved from "https://pripara.fandom.com/wiki/Mirei_School_Uniform_Coord?oldid=206740"
Community content is available under CC-BY-SA unless otherwise noted.