Mew is a Major class Idol in PriPara. She makes her anime debut in Episode 11.She is New's sister.

Mew is a fair skinned girl with dark olive green eyes worn with pale lilac eye shadow. She has fluffy pink-lilac pigtails held by yellow scrunches to match her large loop earrings. She often has a cat's smile.

Similar to her sister, they seem stuck up. Both are confident in their status and demand respect from those underneath them. They also seem to want the spotlight as they were not too happy when Usagi revealed that both of them were backup to Sophie. However, to someone they see as admireable, they do not mind as much.

In Episode 11, they were revealed to be Sophie's PriPara team unit partners for the Sparkling Grand Prix, chosen by Usagi. 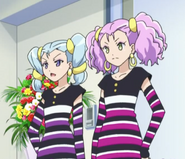 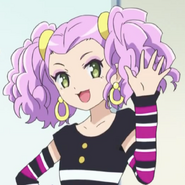 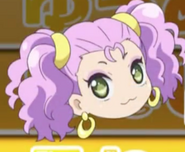 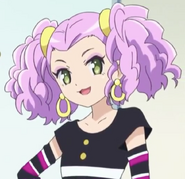 Add a photo to this gallery
Retrieved from "https://pripara.fandom.com/wiki/Mew?oldid=183135"
Community content is available under CC-BY-SA unless otherwise noted.