Mascots are creatures that manage idols in the PriPara world. Originally, only Usagi and Kuma were known by name. However, in Episode 12, many unknown mascots were shown, proving for the first time that there are in fact others.

Another mascot was revealed in the Season 1 second OP, Miracle ☆ Paradise named Unicorn. She was revealed to be Faruru Bokerdole's manager in Episode 17, and made her official anime debut in Episode 26.

More mascots were revealed for Season 2, such as Neko, along with Toriko and Ham that appeared in the OP, Dream Parade.

In Episode 49, it was revealed that there is a school that mascots attend in order to become managers.

A mascot for most part is based off of an animal. They can range from pets or domestic animals, to wild animals or even mythical.

A mascot is a small creature with light tones and various style and size eyes. They all possess wings which also vary in style and size. They also seem to wear accessories, which can range from hair or head objects, to spectacles or neck pieces. According to Usacha, Usagi's little sister, mascots don't do well in humidity. 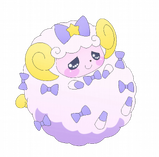 Pitsuji
Add a photo to this gallery

Retrieved from "https://pripara.fandom.com/wiki/Mascots?oldid=182501"
Community content is available under CC-BY-SA unless otherwise noted.