A dark brown jacket with pale gold detail and a band of yellow circling the torso, accenting those on each wrist. Going down each arm is a white and dark yellow section, along with three three sets of button straps near the bottom. The same bands are on the middle of the torso. A small fringed shoulder pad resides close to the neck, while on the corner of the chest is a diamond gem with white feathers attached to a gold base. The collar is made from dark yellow pleat fabric, with pieces of material beneath it, coming in white and pale gold.

A white and dark yellow pattern skirt with large diamond gems sewn in a pattern. A white ruffled petticoat resides beneath this, while sewn over it is a thick, gold glittering brown fabric reminiscent of a cape flowing form the back, lined by thick yellow fabric. Three layers of the same material are sewn on each hip. The waistband is black with a strap on each side held by a button.

Dark brown boots with six bands covering the leg and foot, the bottom of which is yellow. Each band is held by two gold buttons, while sewn to the back corner are white feathers. The cuff is white and dark yellow with diamonds sewn to it.

A yellow bow adorned by gold and white fabric in the center, the middle of which has a diamond attached on each side. Sewn to the top are dark brown and white feathers. 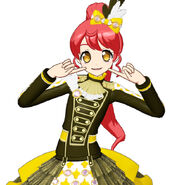 Retrieved from "https://pripara.fandom.com/wiki/Marching_Feather_Yellow_Coord?oldid=196316"
Community content is available under CC-BY-SA unless otherwise noted.