A milk-blue tube top with royal blue ribbon accent, white frills, ribbons, and a trim of ruffled gold fabric. The ribbon folds from the chest to the neck, wrapped around a milk-blue scalloped fabric that has a blue and gold star wand attached to the center, along with gold ruffled fabric and white wings. Sticking out of the bottom is dark blue scalloped fabric with a cloud pattern on it and a piece of white tulle. Puffed cloudy fabric rests under the shoulder with a border of royal blue bands, the top of which has gold ruffled material on top and white scalloped on bottom. A wavy royal blue ribbon hangs from the back with a gold star hanging from each tip. The user gains blue gloves with a milk blue lower half and two pieces of fabric sticking out of the cuff, one a white scallop, the other a gold ruffle. Star bracelets adorn each wrist.

A royal blue pleated mini-skirt lined with milk blue frills and small ribbons around the bottom. Sewn to the front is a winged, milk-blue ribbon with wavy tails and a large pale blue star-shaped gem on a gold base. A scalloped piece of milk blue fabric is sewn around the skirt like a cape with a star-shaped cut lining, along with a border of gold stitched lines and stars. The inside of the skirt is dark blue with clouds covering it.

Tall royal blue boots with a gold sole and star shaped heel. White, wing-like fabric adorns the foot and wraps behind the ankle. The cuff is a milk blue scallop with a trim of white frills on top, adorned by a pale blue star gem with a gold and milk blue tail hanging from it. Comes with milk blue stockings that have thin white lines and a diagonal trail of gold stars adorning it. The cuff is a white scallop held by a royal blue ribbon that has a gem star in the center.

A gem star with a smaller, solid gold star attached to a looped royal blue ribbon. Three wings adorn the ribbon, two of solid white, one dark blue with clouds on it.

Magical☆Star Navy Coord is a Lovely-type Rare Coord from the brand Fantasy Time. It first appeared in the Dream Theater 2017 Time Vol. 5. 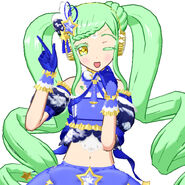 Retrieved from "https://pripara.fandom.com/wiki/Magical%E2%98%86Star_Navy_Coord?oldid=191227"
Community content is available under CC-BY-SA unless otherwise noted.