Start a Wiki
Licking Candy Peppermint Coord (ペロペロキャンディペパーミント) is a coord that has not appeared in the anime yet. It is a Rare Pop type Coord from the brand Candy Alamode.

A melon and light blue striped tank-top with a blue band circling the stomach covered with large, pale yellow spots and lining of lime and white striping. The sleeves are made up of two large swirled candies coated in glitter; one is green, white, and lemon striped with cyan wrapping, the other is lemon, sky blue, and white with lemon wrapping. On the back of the dress is a large swirled candy with wrapping coming in white, pale mint, lemon, teal, and light blue. Sewn to the center of the neck is a wrapped candy resembling the one on the back. Comes with two chain necklaces, one of pale yellow and another of sky blue, decorated with three bows and a white and blue swirled lollipop with a white stick and tiny lime bow. Along with a pair of sky blue finger-less gloves with pale yellow frills and a swirled candy sewn to the top of each hand. The cuff is sky blue and pale mint striped with white and lime lining.

A two-layer skirt. The top resembles a pixie tutu striped with pale yellow, pale mint, light blue, and sky blue. Each section has a swirled lollipop with white stick and either blue or lime bow, while the bottom is lined with lime and white stud dots. Sewn around the top of the skirt are multiple swirl design wrapped candies. The second layer of skirting is composed of several puffed spheres coated in glitter, coming in stripes of lemon and seafoam, white and mint, or lemon and mint.

Glittering blue boots with white and lime glitter coloring covering the toe and center of the boot. The bottom is dark teal in color, while sewn beneath the cuff is a swirled blue, pale yellow, and lime candy with colorful wrapping on each side.

A large glittering swirled candy of lime, blue, and pale yellow. Lemon and white wrapping material is attached to each side, on top of a larger layer of light blue, cyan, pale yellow, pale mint, white, and pale gold.

Licking Candy Peppermint Coord is a Pop Rare Coord from the brand Candy Alamode. It first appeared in the third wave of the 2015 5th Live Collection 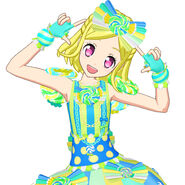 Retrieved from "https://pripara.fandom.com/wiki/Licking_Candy_Peppermint_Coord?oldid=201521"
Community content is available under CC-BY-SA unless otherwise noted.