Laala Manaka (真中 らぁら, Manaka Raara) is the primary protagonist of the original series and a 7th grader at Paprika Private Academy. She is a lovely-type idol and her preferred brand is Twinkle Ribbon. Her catchphrase is Capisce!" (かしこまっ!, Kashikoma!).

Laala has round, teal-colored eyes, and lavender hair that is tied up into two buns with two small tufts of hair sticking out on each side, and a cowlick in the center of her hair. She wears a big pink bow with a yellow heart in the center in her regular hairstyle. In the evening, when sleeping, she lets her hair loose. Laala is the shortest among all of the main idols as Mikan and Aroma, who are also in elementary school, standing a few inches taller.

In her original PriPara form, Laala grows taller to match the height of an middle school student, making her look more mature. Her two hair buns are released into two long pigtails that reach her thighs, and curls at the ends. According to Akai Meganee, Laala looks best in lovely-style clothing, and often performs in Twinkle Ribbon outfits.

During Idol Time PriPara, Laala's "main" idol form matches her appearance outside of PriPara after Yui accidentally folds the PriTicket.

In episode 178, Laala's PriTicket is repaired by Falala, and she can return to her main idol form.

Laala is bright, cheerful, and happy, and is often seen bouncing off the walls. As her house is a restaurant, she has a habit of saying her informal catchphrase Capisce! (かしこま!, Kashikoma!) when taking requests. Laala has a very loud speaking voice which she is very conscious about. When she is singing, she tends to be very quiet due to this. It seems that she can only gain the courage to sing loudly when performing in PriPara.

She is also highly determined with a strong will and can be stubborn when it comes to her goals or the happiness of others.

Manaka (真中) means "center." This can be considered a pun as Mirei and Sophie's last names mean "south" and "north", respectively. 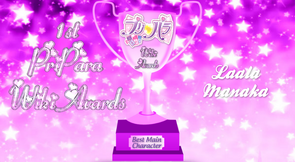 Retrieved from "https://pripara.fandom.com/wiki/Laala_Manaka?oldid=209619"
Community content is available under CC-BY-SA unless otherwise noted.