Kuma (Birthname: Klaus Henrik Poncetta Von Vogel Strobel Cash De La Manecca the Third) is a mascot character in PriPara. He manages Mirei's, Sophie's and Laala's PriPara team - SoLaMi♡SMILE. He has a "friendly" rival relationship with Usagi, due to their similar ambition of becoming top manager.

Kuma is a pink-furred bear with a pale pink muzzle. He has tiny black dots for eyes and a pink triangle-shaped mouth. On each ear is a bright yellow heart. His body is also pink with two pale pink fluffy spots. He wears a purple bowtie with a yellow heart at the center around his neck, and possesses yellow wings.

Kuma seems to be somewhat lazy, but he is determined to make Laala, Sophie, and Mirei into top idols. He is also very competitive and ambitious. He loves green juice. Unlike Usagi, who was overly controlling and arrogant, he really cares for his unit team and tries to help them any way he can.

Kuma tends to add "-kuma", and sometimes "-kumamimumemo", to the end of his sentences.

Von Vogel: German for "of bird." 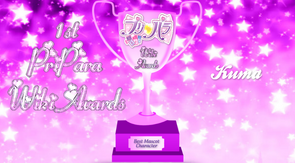