The Idol Time Harp (アイドルタイムハープ Aidoru Taimu Hāpu) is an item that is first seen being held by Falala•A•Larm. When an Idol enters Super Idol Time she will send the harp to the Idol for use. She is also shown being able to make them, giving Yui Yumekawa her own version. In episode 179, it is shown that Galala•S•Leep may also be able to make her own Harp, giving Shuuka Hanazono her own.

Its full powers are currently unknown.

The Idol Time Harp is composed of two separate pieces, one that resembles the Idol Time microphone, while the other resembles a small harp. During performance the two pieces come together, connected by a spherical connector that has a floral design on it. Beneath the large gem piece is a winged heart, followed by a smaller heart surrounded by two stars, one of which has a tail.

Falala's Harp is mainly turquoise in color with  gold glowing stars. The side of the mic is solid white with silver detail that have gold glowing hearts. The heart window and speaker base is silver. The attachement piece is pure gold witn a ring of indigo. The other side of the harp has gold details and pale pink glowing hearts and stars. The winged heart and star area is solid gold, while the stars going down the middle are pale turquoise to match the translucent harp. The stars surrounding the heart are turquoise.

Yui's harp is entirely white with pale pink glowing stars. The gem, heart window, mouth piece, and accents on the mic half are metallic pink, with the other side matching it. The harp piece is translucent white, while the connector is pastel pink. The metallic pink winged heart has a pale pink star on it, residing over a pink heart surrounded by pale blue stars.

A black harp with indigo on the side and a pearl blue band with hearts etched on it. The handle has six indigo stars, and the piece on top is adorned by a pale pink star and heart. The bottom of the harp-holder has a black outline with pearl blue coloring and three stars. The attachement piece used to transform it is purple and white. 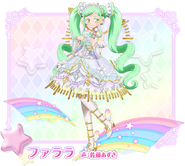 Add a photo to this gallery
Retrieved from "https://pripara.fandom.com/wiki/Idol_Time_Harp?oldid=206653"
Community content is available under CC-BY-SA unless otherwise noted.