Start a Wiki
Glasses Attendant Coord (スペシャルアテンダント) is a coord worn by Meganee Akai. It is a Coord from Prism Stone. It resembles the Special Attendant Coord.

A white button up shirt is worn beneath a short split-colored bolero. The right is navy with blue glasses, and the left is hot pink with pale pink glasses. The bottom has pale pink ruffled trim to match the lining on each white sleeve cuff and lapel. The lapels colors alternate with the jacket, and sewn to the right side are three pale pink hearts. A pale pink and white strap is sewn at the center of the torso. Comes with a light pink cloth tied around the neck with a hot pink gem heart, along with a matching wrist accessory. A belt composed of tiny blue glasses is worn around the waist.

A skirt of six ruffled tutu layers. The top and fifth is hot pink with pale pink glasses, while the second, fourth, and sixth is solid white. The third layer is split into two colors; one hot pink, one navy, both with glasses print on them. Sewn to the right hip is a white and pale pink ruffled bow with a pale pink gem heart in the middle.

Navy pumps with a single, small red pair of glasses attached to them. On the heel is a pink and white ruffled bow sewn to it, matching the pink and white stockings included with the shoes. Each come with three-layer cuff with a white layer on top of a pink, but the top layer is different on each leg. The right has hot pink with pale pink glasses, and the left is navy with blue glasses.

A magenta top hat with thick white lines circling it. The rim is pale pink with a strap of navy above it. A red pair of glasses are attached to the corner.

Glasses Attendant Coord is a PriPara Rare Coord from the Prism Stone. It first appeared in the 2015 6th Live Collection. 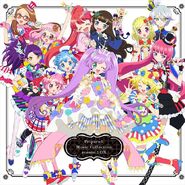 Add a photo to this gallery
Retrieved from "https://pripara.fandom.com/wiki/Glasses_Attendant_Coord?oldid=129619"
Community content is available under CC-BY-SA unless otherwise noted.