A fuchsia jacket with lining of white and gold around the collar, torso, cuff, and sleeves. On each shoulder is a white pad with golden fringe, and on the left arm is a black and gold symbol patch. The material at the center of the torso is a milk-blue camo print with white roses all over it, matching the long cuffs of each wrist. On the torso are six gold buttons. A white and gold strapped band stretches from the right shoulder to the lower left side, matching a four-petal bow sewn to the left of the chest. Attached to it is a milk-blue rose with a large golden crown over it.

A fuchsia skirt divided by a white line and gold piping at each section. On the front are six gold buttons, while smaller sections at each corner give it the resemblance of a flat pleat. In them is milk-blue camo with white roses. Two gold belts wrap around the waist, one of which holds a three layer semi-ruffled material of milk-blue camo print.

Fuchsia boots with hold bottom and heel. The cuff is white with a thin gold band around the middle and a section of milk-blue camo and white roses beneath it. A gold and white striped bow is sewn to the back of it.

Girly March Coord is a Rare Celeb Coord from the brand Brilliant Prince. It first appeared in the 2015 5th Live Collection. 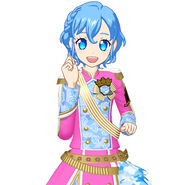 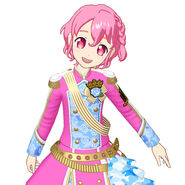 Retrieved from "https://pripara.fandom.com/wiki/Girly_March_Coord?oldid=136754"
Community content is available under CC-BY-SA unless otherwise noted.