A plum top covered in silver stars and lined in sky blue. A large, pale yellow heart with sky blue lining rests in the middle with white and hot pink glitter writing spelling out Fantasy Time. Over this is a pale, silk pink jacket with white material on top of the arm separated from it by light purple and blue striped lines. The collar, cuff, and bottom has fuchsia material with white lining, with the cuff adorned by pastel rainbow beads and a bow on the side. One sleeve has a purple bow, the other has a sky blue. Hot pink gem buttons are sewn to the torso, along with the Fantasy Time logo and two ribbons, each adorned with stars. Comes with a lavender choker accent with a tiny bow and gold dangle charm, a pastel colorful bead bracelet attached to a pink gem star and bow that has a dangle beneath it, and a hot pink ring. On the back is a winged star design.

A milk blue gingham skirt with fuchsia coloring in the pleats. On each section is a glittering purple or white heart with FT written in the opposite color. Pearl buttons rest at the middle of the waistband, while three glittering ribbon are sewn to the right corner, each with a large gem star of sky blue, fuchsia, or yellow. Two ruffled layers rest beneath the skirt, one pale pink, one white. A lavender star shaped purse lined with tiny frills is included with a yellow and white section resting beneath a white and sky blue striped bow adorned with a large hot pink star gem. At each corner of the star is a small gem of blue, white, yellow, lilac, or pink.

Glittering lilac high top shoes with thick white bottom and toe detailed in fuchsia. A glittering silk pink ribbon rests in the middle to match the cuff on top of the shoe. A pastel bead chain of circles, stars, and hearts circles them. White tube socks with sky blue and silk pink ribbon wrapped around them is included with a white and pale pink cuff. The bead chains are sewn on top of a pale pink band and have a ribbon attached to them, one light blue, one pink, each with a gold star in the middle.

Three lace stars sewn together, one pale pink, one light blue, and one a yellow gem on a light purple base. The pink star has a lilac silk bow with a gold star and a smaller sky blue star, while the blue star has a fuchsia bow on it.

Girlish Star Coord is a Lovely type Rare Coord from the brand Fantasy Time. It first appeared in the 2017 Series Promotional Coords. 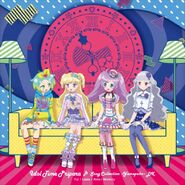 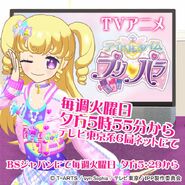 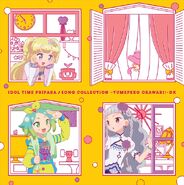 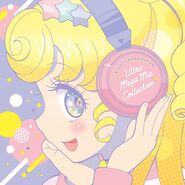 Add a photo to this gallery
Retrieved from "https://pripara.fandom.com/wiki/Girlish_Star_Coord?oldid=208722"
Community content is available under CC-BY-SA unless otherwise noted.