A parka-styled top that is a glittering lime with color splotches of red, emerald, gold, and blue. On the top right and bottom left section are shiny small colorful squares with a single bow in it. On each side of the stomach are two fluffy balls, two yellow, and two orange. The collar is cyan and yellow to match the bottom of the shirt, while a big green glittery bow rests at the center of the chest with a white heart. Comes with two wristbands with a green center, one is red, the other is light orange.

A three layer skirt. The top is shiny square blocks of rainbow colors, while the second layer is glittery green and the bottom is cyan. The band on top of the skirt is also cyan with four shiny clothes hanging from it, each with a ribbon depicted on it. Two layers of yellow and orange cotton balls are worn on the right side of the skirt, each attached to a red, fuchsia, blue, or green bow.

Glittering green boots with cyan chunk-style bottom and strings. On top of the upper portion of boot is three layered shiny rainbow material with orange and yellow cotton balls randomly placed. The band is cyan with a center of glittering green. On the right boot is a red bow, while the left has a light orange bow, both with a light green heart center.

A rainbow, glittery bow with the tails pink with a pink bow depicted on it, while one tail is blue, and the other is purple. In the center is a yellow cotton ball. 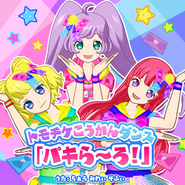 Retrieved from "https://pripara.fandom.com/wiki/Friends_Ticket_%E2%98%86_Exchange_Pop%27n_Coord?oldid=164588"
Community content is available under CC-BY-SA unless otherwise noted.