A Friends Ticket is the top part of a PriTicket that you can trade with friends. They are earned after doing an audition or performance.

Laala, Mirei, and Sophie all exchange tickets together, as a trio.

Sophie, Laala, and Mirei about to exchange Friends Tickets. 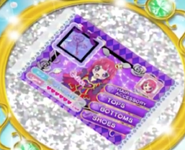 Add a photo to this gallery
Retrieved from "https://pripara.fandom.com/wiki/Friends_Ticket?oldid=208470"
Community content is available under CC-BY-SA unless otherwise noted.