Everyone's Friends! Everyone's an Idol! is the 51th and last episode of the second season of the PriPara anime season and the 89th episode in the series overall. It aired on March 28th, 2016.

To continue her activities in PriPari, Hibiki has decided to return to EuroPara. Laala and the others decide to hold a birthday party and goodbye party for her at the same time.

On a fresh, new morning Laala and Non prepare for school. While doing so, she tells Laala that she performed well in the Dream Theater which Laala is humble about. However, Non's number one favorite idol is Falulu and third is Hibiki, which Laala is surprised to know.

At Paprika Private Academy, all students were gathered for a morning assembly, where Hibiki also announces that she's going back to EuroPara, which made everyone, especially her fans, surprised. To make sure she's alright, the other main cast went to her office. They were surprised that Fuwari is there and also plans to leave with Hibiki. Hibiki explained to them why she's leaving, saying that she has some duties in EuroPara. Fuwari also tells them that Hibiki's birthday is soon and they decide to celebrate it but before they can get a word in, Hibiki kicks them all out of her office. Fired up, Mirei tells the other idols that they must throw a birthday party for Hibiki.

In order to lure Hibiki to the birthday party, the gobi idols all surprised her when she was about to enter the elevator, causing her to faint. The next time she opened her eyes, she was sitting in the center with Falulu and Fuwari. She was puzzled until Laala welcomes the idols to Hibiki's birthday and farewell party with Falulu and Fuwari. During the party, there were fun activities, dedications and more. Hibiki was also able to survive the gobi idols thanks to the new headphones Andou gave him. This made her a little guilty after she fired him for telling her wish.

Hibiki left the party without anyone noticing to feel a little better and look for Andou. Fuwari followed her and the two girls lied on the grass and had a little talk. Hibiki told Fuwari a little about how she felt during her childhood but some words from her made Hibiki more better. She also found out how she can get Andou back to her.

Everyone was having fun in the party when Hibiki appeared and was seen dressed as a lady. They were surprised but Andou was feeling a little happy on a corner. This was disturbed when the PriPara Police caught him and Hibiki showed that the image was just an illusion to find Andou. She apologized to him and asked if he can be her butler again which Andou answers with a yes.

Meanwhile, the Meganiis hold a summit and showed a board saying "Divine Idol Grand Prix". The episode ends showing a baby in an area full of light crying. 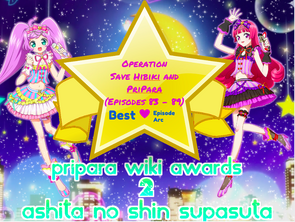 Add a photo to this gallery
Retrieved from "https://pripara.fandom.com/wiki/Episode_89_-_Everyone%27s_Friends!_Everyone%27s_an_Idol!?oldid=211757"
Community content is available under CC-BY-SA unless otherwise noted.