Shion VS Hibiki is the 24th episode of the second season of the PriPara anime series and the 62nd episode in the series overall. It first aired on September 12th, 2015.

Hibiki targets Shion as his next victim, and makes her become more passionate to be a divine idol, as his plans become more in-depth.

Shion wakes up from a dream reliving the moment the Theiving Genius stole the Summer Dream Parade Coord, while Hibiki plots her next scheme to lure Shion into her plans. At school everyone is talking about a festival when Shion is approached by Hibiki's butler, Ando, who gives her a letter from Hibiki, asking her to meet her after school. Shion decides to go though with the request although she doesn't understand why Hibiki would want to see her. The others think that Hibiki has sent Shion a love letter and plan to secretly follow her to find out if Hibiki is in love with her. Hibiki turns up on her horse and whisks Shion off, taking her home. The others follow but are prevented from entering Shion's house by Hibiki's butler, and are made to read high school-level Chinese books. Shion shows Hibiki her abilities in sword fighting and martial arts before she asks her for a game of Go. The others meanwhile are forced to play soccer and must score a goal against Andou before he will allow them to see Shion. This is however a distraction while Hibiki talks with Shion. Hibiki tells her that she has all the potential to become a divine idol and that if she wishes to know more she should come to her apartment. Hibiki then leaves, ignoring the questions from the others who are all exhausted from playing soccer. The next day at the festival, Shion thinks about what Hibiki said and decides to go and see her. Hibiki takes her on a helicopter ride over the festival, where she notices the city looks just like a giant Go board. Hibiki asks her if she has ever performed solo to which Shion replies no as she has always performed as part of Dressing Pafé. She however remembers the day she became an idol and her vow to become the best and wonders if she has what it takes on her own. The next day she performs her very first solo live with her own song and making drama, and manages to rank up. Her resolve strengthened, Shion vows to be more passionate at being an idol and strive to reach the divine rank as part of Dressing Pafé. The last scene shows Hibiki placing a model of Shion into the Dream Theatre diorama and deciding who to use next in her plans. 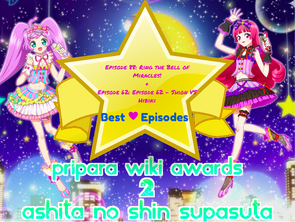 Add a photo to this gallery
Retrieved from "https://pripara.fandom.com/wiki/Episode_62_-_Shion_VS_Hibiki?oldid=211626"
Community content is available under CC-BY-SA unless otherwise noted.