Laala and Mirei head to the Minami household to practice their 194 jump plan and think of a brand new Making Drama without fear of being caught by Headmistress Gloria. But tension rises for Mirei as Laala witnesses her parents bicker over her becoming someone of their own profession rather than what she wants.

In PriPara, Laala and Mirei listen to their brand new song, but while Laala likes it, Mirei isn't impressed. Kuma yells at her ignorance and explains the importance of idols having a personal song written just for her, so in two days he's planned for them to debut it.

Elsewhere, Sophie has just finished her performance and is greeted by her fan club. They compliment her and she thanks them, only to suddenly go limp and fall asleep. They give her a pickled plum to return her to "normal".

Mirei explains the idol standings to Laala and points that they will need to increase their ranking before they can even try to partake in the auditions Sophie does. But she has an idea for the announcement of their new song, including the fact that they will unveil a brand new Making Drama specifically for it. With those plans, the girls transform and head into PriPara to get to training- but to their frustration they find the training facilities to be completely full, there are even several girls still waiting to take their turn. Seeing as they can't get through, Mirei suggests practicing at Laala's.

At Papa's Pasta, Gloria is in the middle of a meal when she brings up Laala not being there. She gets frustrated after her mother brings up that Laala went to hang out with a friend, claiming that friendship is worthless, but rather than go into discussion she request another order.

Witnessing this outside the girls complain over the hindrance of her being there, and Mirei decides the only other thing they can do is to bring Laala back to her place. Laala is very excited but she worries over Mirei's parents as she hasn't met them yet; up until they arrive, when Mirei's mother warmly welcomes her and brings up how rare it is for Mirei to bring over a friend.

They head up to Mirei's bedroom to see what looks to be Kuma in pillow form, and a huge Pop-style painting, causing Laala to express amazement she would have such things and flustering Mirei, who changes the subject by trying to return her focus to their plans. But Laala gets distracted by a photo album and begins browsing it. Mirei scolds Laala before they sit down and asks her how she was able to think of the Making Drama they performed last time. Laala explains her thought process to her, saying that a Making Drama is a feeling they convey in a message to their fans; so their first step should be to determine their feelings to the fans, but they aren't given much time to figure it out when Mirei's father interrupts to invite the girls to have tea with them.

As the four enjoy the snack, Laala thinks about how refined and nice Mirei's parents are and momentarily compares them to the hectic household she lives in. They start to discuss how much they enjoy the food of Papa's Pasta, causing her to snap out of it and ask what her parents careers are, but she isn't able to understand their jobs of prosecutor and Attorney, so they make an example for her- until this results in them arguing, forcing Mirei to inheritly act as Judge to silence their arguement over snacks. Laala is too shocked to say anything and gets startled after she is called on as witness, and when she can't decide on cookies or pudding, Mirei decides they will just have both. With that the meal returns to normal and Mirei's parents apologize for how random that was, but this happens quite often and they refuse to quit until someone acts as a judge for them. But this only strengthens their love.

Returning to Mirei's bedroom the girls resume thinking of a brand new Making Drama, but still struggle. Laala goes on to explain how much fun she's been having lately after, and in that she realizes what she wants to convey to the fans. Before she thought she was happy, but not as an idol she's even happier, and she wants to bring every happy moment together into one. Satisfied by this, Mirei adds happiness to her calculations when they are interrupted by Mirei's feuding parents once more.

They go to see that they are fussing over Mirei's future career and Laala grabs Mirei's judge items, only for Mirei to point out its senseless because this is the only argument she can't control. All they can do is wait for it to die down naturally. Laala feels saddened by this, and she wonders if they even know Mirei is an idol, causing her to run back to her bedroom and locate the photo album. She yells at Mirei's parents and discusses how well they normally get along while showing them various pictures, and this seems to get them to stop.

In one picture they notice something and recall how entranced Mirei was by the PriPara Program with Saints on, and since then she's dreamed of becoming an idol; Laala is surprised as she didn't know they were aware, but as it turns out they want her to become an idol for law by choosing one of their professions. They are oblivious that Mirei only wants to be a pop idol and decides to end her time with Laala for the day. She thanks her for her advice and she feels inspired, asking Laala to leave it to her.

For their performance the girls change and arrive on stage. They perform and they are brought to a platform, where it's revealed that not only have they passed the audition, but they ranked up and Mirei's parents watched the performance. They comment on how wonderful it was and she feels happy, until hearing them both assert that she should become an idol that fits their decision, but they will respect her own decision and stop arguing over it as much.

Elsewhere, Sophie happened to notice the girls for a moment until Sadako reminds her that her turn is coming up. She follows her into the performance area and takes off, just as Laala and Mirei come into the room to celebrate. 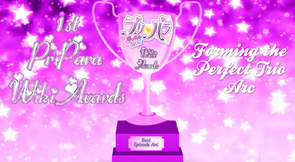