A one-piece outfit composed of a top and skirt. The top is white with a piece of light pink material wrapped over it lined in sky blue and adorned with silver diamonds and four gold stars. The top of the chest is lined with pearls to accent the lapel on the left side of the chest. A flap of pale pink check material hangs down on the right side of the chest, along with a large white feather. A pale pink check collar is sewn to the top, lined in sky blue and pearl studs, while covering the right shoulder are three pieces of material covered in sequins, two fuchsia, one sky blue, resting over a large white fluffy sleeve. The skirt is in two layers, the top shaped like a petal tutu lined in pearls, with each petal alternating between pale pink check and wavy lines of fuchsia and pale pink. Each petal has a sequined, sky blue arrow pointing upward, towards the white, sky blue, and fuchsia striped belt. Gold chains hang from the belt, along with a thick furry white piece that rests on the right hip. The second skirt is pale pink. Comes with a blue fishnet sleeve with sequined stars attached to it and a fuchsia cuff lined by pearls.

Two short boots with white strings and thick wedge bottom. One boot is fuchsia, the other sky blue, each with a large gold and fuchsia star sewn to the side. Comes with two alternate stockings, each lined by studded pearls. One stocking is pale pink check with a sky blue sequined arrow pointing up, while the other is sky blue fishnet with sequined stars sewn to it.

A fuchsia marching hat with a white chain circling it, attached to a white gem star. A large gold star accent by sky blue and pale yellow rests in front of large white feathers.

Dressing Pafé Cool Baby Coord is a Cool Super Rare Coord from the brand Baby Monster. It first appeared in the second wave of the 2016 Series Divine Idol Promotional Coords. 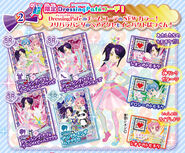 Add a photo to this gallery
Retrieved from "https://pripara.fandom.com/wiki/Dressing_Paf%C3%A9_Cool_Baby_Coord?oldid=202683"
Community content is available under CC-BY-SA unless otherwise noted.