The Cyalume Charm is an item used in relevance to Cyalume Change. Idols who possess this Charm are participants in PriPara's Dream Theater. It helps them to get into cyalume fairy. It debuts in Episode 39 of Season 2.

The Cyalume Charm is a heart with a smaller heart-shaped gem in the center that shines in multicolored lights. Attached to the top is a fuchsia pair of wings with a small star-shaped crystal in the middle, and a white bow.

Cyalume Charms, when first given, are colorless until an idol first uses the Charm during their Cyalume Change. After the performance, idols are assigned a type depending on which color their Charm turns into - pink for Lovely, blue for Pop, purple for Cool, green for Natural and yellow for Celeb.

The wings and the gem on the Charm's center can also turn gold. This has been seen only once with Faruru, which Meganee suggests is a result from her time spent in Paris. The wings on the Charm are detachable and can be switched with others, such as when Faruru traded her gold wings for Laala's regular pink wings.

Other than turning to gold, the cyalume charm can also been decorate by using a crown and the germ. Hibik’s cyalume charm is one of the sample.

The Cyalume Charms signalize when a Dream Team has been formed, with all five Charms shining simultaneously. The Charms seem to pay no heed to pre-existing units, such as when Laala was integrated as a part of Dressing Flower despite being an active member of SoLaMi♡SMILE.

The Cyalume Charms are also necessary in accessing Cyalume Fairy during Dream Theater performances. However, as only Aroma, Fuwari, Sophie, Ajimi, Laala, and Hibiki have been seen using the Charms in such a situation, it's unknown whether it's required for the whole team or just the group center in order to activate the change.

The Cyalume Charm has a built-in "limitation code" that can be used with the game unit data. The charm doesn't normally catch any signals, but it does catch/correspond to music from the game unit so points are earned and the limitation code is released.

There are eight different types of limitation codes that become luxurious dresses based on the number of points earned. Also if the charm does manage to catch a signal, then the center will shine in seven different colors, thus making the game more fun.

The Millefeui Collection set can be used used for it, and are rare Cyalume designs that were made just for the Cyalume Charm. There's also a 2D code at the bottom of that card in the game unit that can be used in the game. 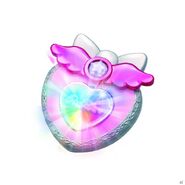 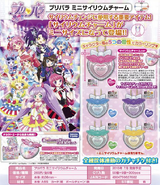 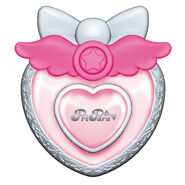 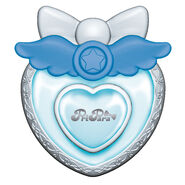 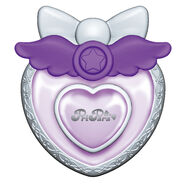 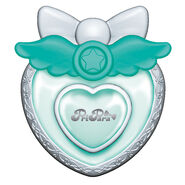 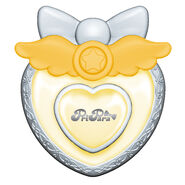 Shion Use the Charm

Mirei Use the Charm

Leona and Dorothy Using the Charm

Celeb Charm
Add a photo to this gallery
Retrieved from "https://pripara.fandom.com/wiki/Cyalume_Charm?oldid=213228"
Community content is available under CC-BY-SA unless otherwise noted.