A black work shirt with tiny gold buttons and ruffled fabric in the middle of the chest. A short red gingham tie is included. Worn over this is a teal gingham vest with a low cut lapel of gold, matching the four buttons on the navel. Red gingham cuffs are included, each with two buttons.

A four-layered ruffled fabric with the top two layers being a skirt while the bottom two are loose shorts. The top three layers are trim with gold frills to match the two chains hanging from the left hip. The first and third layer are black with thin gold lines, the second is red gingham, and the last is teal colored.

A red gingham hat with gold line at the black metallic rim.

British Rock Red Green Coord is a Cool Rare Coord from the brand Baby Monster. It first appeared in the Time 2017 Vol.2 Collection. 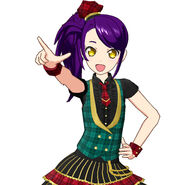 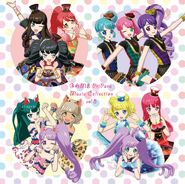 Retrieved from "https://pripara.fandom.com/wiki/British_Rock_Red_Green_Coord?oldid=205431"
Community content is available under CC-BY-SA unless otherwise noted.