A sequined dark gray blouse with puffed sleeves and a band of solid white. The lapel is glittering silver and lined in white. A silk gray ruffle lined in white circles it on top of a layer of glittering silver with two tiny pieces of gray sequin fabric beneath it. The collar is solid white with a gray gingham print ribbon held by a gray and white diamond gem. Comes with a white solid ruffle wrist piece with a silk gray layer over it.

Short gray sequin shorts with white lining. A two layered ruffled skirt wraps around them, one in the shape of a small tutu, the longer piece reminiscent of a tutu, both lined in white with a gray gingham print. Gray diamond gems on a white base line the longer skirt. A double ribbon is tied to the left corner, one made of gray striping, the other is white, pale gray, and black striped. The ribbon tails are gray and white striped. A gray pom-pom rests in the middle of the bow.

Dark gray sequin boots with a solid bottom and toe. The ribbon ornament from the skirt is sewn to the front of the ankle. White string lace up the middle. The cuff is made from gray gingham.

The ribbon from the skirt and boots enlarged for a hair accessory. A gray pom-pom is sewn to the center.

Black and White Shion Coord is a Cool Rare coord from the brand Baby Monster. It first debuted in the Dream Theater 2016 Divine Vol. 5. 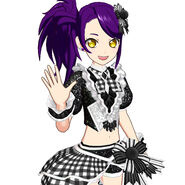 Retrieved from "https://pripara.fandom.com/wiki/Black_and_White_Shion_Coord?oldid=202200"
Community content is available under CC-BY-SA unless otherwise noted.