A black cropped top with a purple line going down the center and an electric blue bodice with the middle cut out to expose the navel. Black ribbon wraps around the fabric and lining the center are studs. Over the top is a split-colored jacket, the right is black and the left white, with opposite colored sleeves and buckled cuff. The sleeve is covered in light purple studs. The propped up collar has stud lining and is colored half electric blue, half purple, opposite colored of the heart-shaped lapel. On the side is a pointed white bow with silver lining and a purple diamond connected to two chains hanging from a silver diamond on the opposite side. The skirt is in three ruffled layers with a black ruffled peplum on top, coming in solid purple, followed by half black with a diagonal black, electric blue, and purple striped layer, and a white layer with diagonal stripes facing the other direction and white in place of purple. Studs hang from the peplum, and on the left hip are two chains. Included is a black studded choker with chains beneath it, and finger-less gloves with buckled straps, coming in black and white.

A metallic purple clip with a black and white studded wing on the side. Two chains hang between the wing. 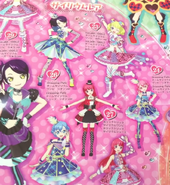 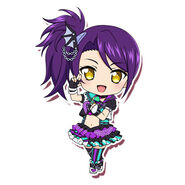 Add a photo to this gallery
Retrieved from "https://pripara.fandom.com/wiki/Baby_Monster_Cyalume_Coord?oldid=209934"
Community content is available under CC-BY-SA unless otherwise noted.