Asahi Parka Coord (アサヒ) is a Pop-type coord from the brand Neon Drop. It has not appeared in the anime yet, nor has it been worn by anyone. This coord resembles the Street Yellow Parka Coord, Street Green Parka Coord, and the Street Pink Parka Coord.

A thick white and red parka with stripes on the sleeve and accent of white and black stars surrounding the NEON DROP logo. Dark grey string laces the hood. The sleeve cuffs are red. The lower right corner has three colorful pins on it. The skirt is in two scalloped layers, the top being black with white letters and triangles covering it, the second is white with red triangles, some lined, some solid, covering it. Each side has a strap hanging from it, one being red, the other is white, both with triangles covering them.

A pair of sneakers with three Velcro straps, one is white with a striped sole and red straps, while the other is red with a solid white sole and straps. Both have stars sewn to the middle of the straps, coming in black, red, and white. Included are loose white socks that have two red lines on the cuff, worn over a pair of black socks with white lines on them. Further up on the left leg are two accessories, one is red with white line stars, the second is black and white.

A red rabbit-ear knotted bow that has two triangles in the middle.

Asahi Parka Coord is a Pop Rare Coord from the brand Neon Drop. It first appeared in the Time 2017 Vol. 5 Collection. 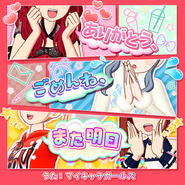 Add a photo to this gallery
Retrieved from "https://pripara.fandom.com/wiki/Asahi_Parka_Coord?oldid=205403"
Community content is available under CC-BY-SA unless otherwise noted.