Start a Wiki
American Casual Sky Coord (アメカジスカイスカジャン) is a Pop-type coord from the brand Candy Alamode. It has not appeared in the anime yet. It resembles the American Casual Retro Coord.

A plain light blue top with a dark blue collar, worn beneath a white jacket with dark blue line detail, heart-shaped buttons, and fabric on the collar, bottom, and sleeve cuff, each with a white stripe in the middle. The wrist stripe has lace over it with a dark blue bow on the side, accenting the thin ribbon on the lower torso, which is held by a small white star. On the right of the chest is an indigo and white diagonal bow with stars in the middle, over a dark blue bow. On the opposite side is Fantasy, written in blue.

A skirt in two layers. The top is blue with white polka-dot print, followed by the second layer, which is semi-ruffled and dull white.

Blue pumps worn with a pair of blue polka-dot stockings. The cuff is dull white scalloped.

American Casual Sky Coord is a Pop Rare coord from the brand Candy Alamode. It first appeared in the Dream Theater 2017 Time Vol. 7. 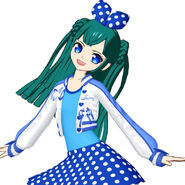 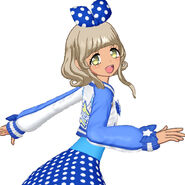 Retrieved from "https://pripara.fandom.com/wiki/American_Casual_Sky_Coord?oldid=202976"
Community content is available under CC-BY-SA unless otherwise noted.