Ajimi Attendant Coord (あじみアテンダント) is a Pop-type coord from the brand Candy Alamode More. It has not appeared in the anime yet.

A white buttoned top worn beneath a split-colored bolero, the right hot pink with violet glasses, and the left light blue with pink glasses. A pastel yellow fringe lines the bottom to accent the two rings on the white sleeve cuffs and lining on the lapel, which is opposite in color from the bolero. Three pale pink hearts are sewn to the right corner, while a single pastel yellow and white heart themed strap rests in the middle of the torso. Included is a pastel yellow neck scarf with a single heart on it, a pink glasses belt on the navel, and a pastel yellow wrist piece with a heart on it.

A ruffled tutu in six layers. The first and fifth are light blue with a shiny glasses print, while the second, fourth, and sixth are solid white. The third layer is a split of the light blue and pink fabrics, accent by white stripes. Sewn to the front right corner is a yellow and white ruffled bow held by a single heart.

Hot pink pumps with a pair of light blue glasses resting on the top of each foot. On the back is a ruffled white and yellow bow to match the included stockings, which have a three-layered scallop cuff. The top layer matches the bolero, with one side blue and the other pink, followed by a white solid layer, and a yellow layer.

Ajimi Attendant Coord is a Pop Rare Coord from the brand Candy Alamode More. It first appeared in the 2017 Series Promotional Coords. 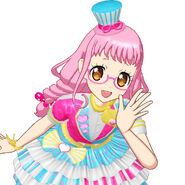 Add a photo to this gallery
Retrieved from "https://pripara.fandom.com/wiki/Ajimi_Attendant_Coord?oldid=183092"
Community content is available under CC-BY-SA unless otherwise noted.