A white button-up worn underneath a dark green and gold vest adorned with three buttons. A viridian lined jacket is worn on top with dark green cuff lined with two layers of ruffles, one white, one gold, and a single gold band. On each shoulder is a gold shoulder pad with two beaded chains hanging from it, and the torso is lined in gold. The lapel is blue and on top of the chest are three gold chains, each held with two gold stars. Sewn to the right is an emblem and a gold badge. A red lined bow is worn at the neck with a tiny navy and white tie.

A viridian lined pleat skirt with a single gold line around the hem. The waistband is dark green to match the thick glittering ribbon beneath the skirt. Sewn to the side is a ruffled white cloth with lines of gold and dark green, and hanging beneath the waistband are three chains attached to the emblem from the top, one of which is beaded, while the other is adorned with several star charms.

Tall white boots with dark green sole and shoelace. Two gold chains hang over upper foot, each attached to a badge on the inner-foot and an emblem on the outer. A red lined bow is sewn behind the boot. Comes with lined viridian tube socks with gold and white ruffles sticking out from the top and a white and dark green ruffle mid-way down.

A patch emblem with two ruffled cloth attached to the side, one white with dark green and gold lines, the other dark green with a single gold line. 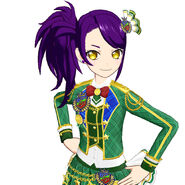 Add a photo to this gallery
Retrieved from "https://pripara.fandom.com/wiki/Adolescence_School_Viridian_Coord?oldid=206356"
Community content is available under CC-BY-SA unless otherwise noted.